Grains and hay were the main crops on the Minidoka Project, as they were in other parts of Cassia County. In 1915 the alfalfa crop was nearly 40 percent of the value of all crops that were raised…
But Minidoka Project farmers had begun to raise other crops that would become increasingly important through the years. One of these crops was sugar beets. Farmers from Utah who had experience raising sugar beets were among the Minidoka Project homesteaders. They began asking for a sugar factory to come to the area so that they could raise sugar beets as a cash crop. At the same time, the Amalgamated Sugar Company was looking for a new beet-producing region… 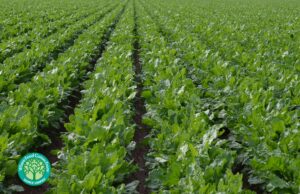 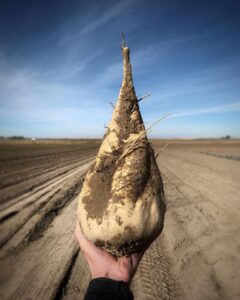 “A tug of war developed between the north side (Rupert) and the south side (Burley), with Burley being the winner,” wrote Amalgamated employee J.R. Bachman. In 1912 (a factory in) La Grande (OR) was demolished, and its building steel and machinery were shipped to Burley. The Burley factory was completed in time for the first sugar to be processed in the fall of 1912.’
“The sugar beet was a temperamental crop, requiring intensive cultivation and much hand labor. Beet seed was multigerm, with a single seed producing several beets. Thus sugar beets had to be hand thinned—a back-breaking, time-consuming task. At first family crews provided the labor, remembered Cassia County farmer Bill Beck. “To be a good beet farmer you should plan ahead and have a large family.”
“Japanese workers began coming into the area after 1912. “They used a short hoe, cutting out the block with one hand and the finger on the other hand would thin the beets and get the weeds. Their accuracy and speed was remarkable. They really educated the local workers on how the job should be done.”
“Mary Onishi Ogawa remembered that even though her mother was a city girl from Japan, she thinned and topped beets. As a result, her mother “had holes in her legs. When you miss the beet, you end up with holes in your legs from the beet knife.”
“Following World War I quite a number of American Mexicans came in from California and Colorado. These workers along with the Japanese workers, who made the annual spring pilgrimage, did a fine job helping to take care of the labor requirements both in the spring and fall.”
“Sugar beets did so well in the Mini-Cassia area that in 1917 the Amalgamated Sugar Company built another factory in Paul.’