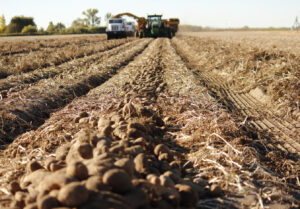 In 1872 a twenty-three-year-old plant breeder named Luther Burbank found a single seed ball growing on the vine of one of his Early Rose potatoes. Because Burbank had tried without success to produce an improved potato, he watched the seed ball with interest, intending to harvest it when it matured.
One day it was missing. He didn’t think an animal or bird would have taken it, so he started to look for it. “Day after day I returned and took up the search again,” he said, “and at last this patient search was rewarded. The missing seed ball was found.” Though Burbank did not know it at the time, his diligent search for the seed ball would make possible the Idaho potato industry.
“I planted the seeds in that ball,” he said. “I had twenty-three seeds and I got twenty-three seedlings. From that whole number, although there were many that were an improvement on any potato then grown, I selected two that were amazing, valuable, and a distinct type. They were as different from the old Early Rose as the beef cattle of today are different from the old Texas longhorn.
“It was from the potatoes of those two plants, carefully raised, carefully dug, jealously guarded, and painstakingly planted the next year, that I built the Burbank potato.
The original Burbank potato had a smooth, light skin. Within a few years a new strain of the Burbank appeared in Colorado with a dark, reticulated skin. Called the Russet Burbank, it would become the famous Idaho potato.