Synopsis of the book “A Flood Cannot Happen Here”, written by the book’s author, Kathleen Hedberg

Most people in Cassia County were not worried about a flood that spring of 1984. But with a snow pack in January that was 240% of normal, the Soil Conservation Service issued a warning: the reservoir near Oakley would fill.
The 143-foot high Oakley dam, completed in 1913, had been built to store water primarily from Goose Creek. The dam included a spillway so surplus water could flow to the Snake River down the Goose Creek channel. But the amount of water had been badly over-estimated. The spillway was used once, in 1921, the only time the reservoir had filled. By 1984, the Goose Creek channel had been completely obliterated The City of Burley was built on the 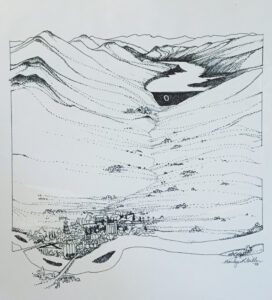 Goose Creek delta. A shopping center, hospital, and school were in the Goose Creek channel.
In April the directors of the Oakley Canal Company, which owned Oakley reservoir, met with their lawyer concerning liability if the reservoir should spill. Their safest course would be to do nothing, they were told. It was their right to let the water go over the spillway and down the creek. But the directors felt that such a course was irresponsible. They released as much water as possible into their canal system and any other place they could find. But

in spite of these releases, when the mountain snow melted, there would be more water than the reservoir could hold.
By this time Cassia County officials were realizing they had a problem. If water ran down the old Goose Creek channel it would be a major disaster–destroying farms, homes, the Burley irrigation canals and much of the city of Burley. They needed another place to put the surplus water. Civil Defense Director Terry Bingham asked for help from the Army Corps of Engineers. They sent Tom Tate, a veteran flood fighter, to see what could be done.
It was decided that Murtaugh Lake, owned by the Twin Falls Canal Company, was the best place to put the surplus water. A 23-mile canal could be built to the lake, using an old natural drain. The Corps would construct 14 miles of the canal with local people responsible for the rest. Permission was quickly obtained from the Twin Falls Canal Company, from two highway districts, and all the property owners along the route. “I’ve never seen the degree of cooperation we’ve had here,” said Tom Tate. “I’ve been doing this for 30 years, and I’ve never had it this way.”
Construction began in earnest on May 5. Volunteers donated time and equipment. Contractors worked without knowing who would pay them. Corps-hired equipment began moving into the area. Fearing that the canal would not be finished in time, canal company directors received permission to raise the reservoir spillway by 3 feet. By May 12, with the canal to Murtaugh almost complete, it appeared the problem was solved.
Then came Cottonwood. Sunday, May 13, Cottonwood Creek broke into the new canal, filling it immediately. By Monday night the water was pouring into Murtaugh Lake. Leland Baker and others worked desperately trying to keep the water from breaking the banks.
“We had failed,” said Terry Bingham. With Cottonwood Creek taking the canal’s entire capacity, there was no room for reservoir water. By Sunday night the water would reach the top of the spillway extension, flow over the spillway and down the Goose Creek channel to Burley, destroying everything in its path. Tom Tate met with city and county officials to help them prepare for the flood.
Since the beginning of the crisis, Rex Gerratt, president of the Oakley Stake of The Church of Jesus Christ of Latter-day Saints, had been directing church volunteers to help prevent flooding. Some of these local people knew there was another possibility. Soil Conservation Service engineer Burke Scholar had found that the lowest place where water could enter the Snake River was two miles west of Burley where Cottonwood Creek had once flowed. A canal could be built from the reservoir along an abandoned railroad track and cut across some farmland to the Cottonwood drain.
Rex and others met with Tom Tate and the county officials. “Dig the ditch,” they said. Though it would damage farmland, it would be much less devastating than letting the water run uncontrolled through Burley. But if they moved the water out of its natural drain, they could be sued, the lawyers warned. And could the canal be built in time? If they could get the right equipment, they could do it, said construction foreman Ernie Straubaar.
County Commissioner Weldon Beck made the decision. “If Ernie thinks it will go, we’ll do it,” he said. “We’ve got to do what’s best for the county. We won’t let it go without a fight.” Another meeting was called. Everyone scattered to alert the 53 landowners along the new route. 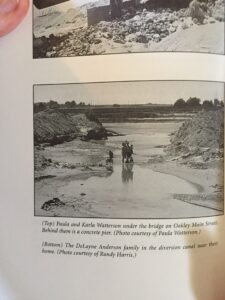 Terry Bingham conducted the meeting. “Questions were asked,” he later said. “Who would pay for construction; who would stand the damage to the property that would otherwise be unaffected?” Tom Tate could not promise that the Corps would help, but he advised the local people to go ahead anyway. “The meeting ground on. No one had the answers.”
Rex Gerratt stood and the room fell silent. “Brethren,” he said, “we are committed. These landowners will be taken care of. I promise you and them we will not let them down. It’s true we don’t have all the answers. But this plan will be millions of dollars cheaper than allowing the water to spill, ruining our farms and homes and the City of Burley. Now let’s give Ernie the go-ahead. We only have 3 or 4 days to build another canal.”
“It totally changed the meeting,” said Terry. “There were still questions, but everybody knew it would be done.”
Tom Tate called the Corps of Engineers director asking for permission for a flood fight in advance. “These people are going to do it,” he said. “It would not look good if the Corps stood by and refused to help.” To make the digging legal, county commissioners invoked the police powers act, an old law that allowed them to take property and damage it for the good of the community.
The next few days were a frenzy of activity. As the huge earth-moving equipment arrived, Soil Conservation Engineers quickly surveyed the route and built a structure that would direct the water to the new canal. Burley Irrigation District employees installed culverts to take their irrigation water under the canal. Volunteers helped landowners move fences and sandbag their homes. The Blacker home was the most vulnerable for flooding; the Randall’s home and dairy barn would be bisected by the canal. The Randalls would have to drive twelve miles one way in order to get to their cows.
Meanwhile Corps workers and volunteers continued their frantic work on the Murtaugh canal, hauling rocks from the desert to keep the banks from breaking. Tom Tate asked Leland Baker to supervise the work on the Murtaugh canal. “I think I’m the only person who had charge of the Corps who didn’t work for the Corps,” Leland later said.
At dawn Thursday morning, May 16, the digging of a new 24-mile canal began. It would be 70 feet wide, 3 feet deep, with banks 3 feet high and 20 feet wide. Volunteers drove tractors to pack the banks. “There was really a scurry ahead of you,” said equipment operator Lawrence Burch. “They told us, ‘If anything is in the way, haystacks or anything, doze them down.’”
The water in the reservoir was rising fast. By Sunday morning it was half-way up the spillway extension. It had to be released, said the dam safety engineer, even though they were still digging the lower end of the canal. At 8 a.m. the water began flowing down the new channel. Twenty-four hours later, at 8:10 a.m Monday, it reached the Snake River. The county was cut in half until temporary bridges could be installed.
But like the canal to Murtaugh, the new canal could easily break. Volunteers walked and the banks day and night, watching for problems. The State of Idaho authorized national guard dump truck unit to help reinforce the banks. Both canals remained intact. Not one home was flooded.
For two weeks the water ran in the new canal. Friday, June 8, the water stopped flowing. “What a relief it was when they turned the water out and we could run our motorcycles through the canal,” said Val Robins. “It made it part of our farm again.”
Landowners began assessing the damage and filing tort claims. Because of the police powers act, the county could not legally reimburse those who had been damaged. Rex Gerratt spearheaded a fund-raising effort to provide some compensation for those whose lands had been hurt. He met privately with each landowner. “We’d talk about the emotions, the physical damage,” he said. “Then I’d say, ‘What would it cost to make you feel good?’” What the landowners asked for was a fraction of the tort claims.”
“It’s our community,” said farmer Richard Randall. “We have to protect the town and the community the same as the next person. Somebody has to get hurt to help others.” Not one of the landowners sued.
Today few people think about near catastrophe of 1984. But for those involved, the building of the canals was more than the saving of a community. Farmer Lane Gochnour summed up the feelings of all. “The Oakley flood diversion project was inspired,” he said. “None of the leaders would take credit for this miracle even if you twisted their arm because anyone involved closely with this project knows that it was the spirit of the Lord that enabled a handful of property owners and an army willing people to cooperate, put their personal considerations aside and help God to accomplish one of the greatest miracles of this generation.” 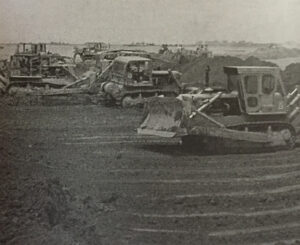 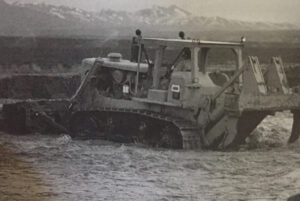 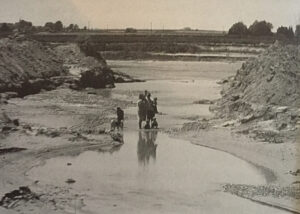 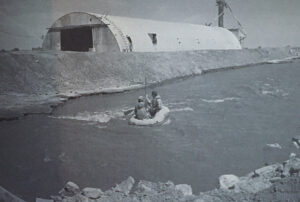 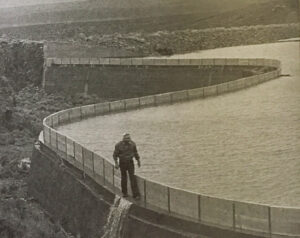